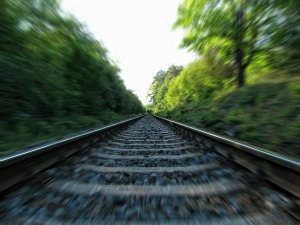 On Monday morning Laura found herself waiting to be pressed up against the glass of the tube door once again. When the train pulled into Highgate, instead of the usual surly silence she was hit by a wall of sound as the carriage doors opened, and once inside it was deafening.  Her journey was to be enlivened by twenty four extremely excitable language students. Though not an uncommon sight in July they were rarely to be found on the Tube at such an early hour, but here they certainly were this morning with their matching backpacks and caps, talking in high speed, high volume Italian. Laura could see the veins already standing out on the neck of one regular commuter, while another businessman gripped his newspaper with white knuckled hands. She didn’t mind though, their joie de vivre was rather infectious and she smiled at them.

When the train ground to an unscheduled halt in a tunnel Laura immediately peered through the dirty glass and tried to see out. There was nothing out of the ordinary though, just the usual jumble of cables running along the blackened bricks of the tunnel wall, and with a jerk that caused stumbles and merriment among the students they were soon on their way again.

The first thing she did when she got to work was to log on to the online catalogue and browse through some of the dozens of books on the rivers of London. The ones she chose were stored, like many of the millions of volumes the British Library held, not at St Pancras but at Boston Spa a couple of hundred  miles away. She logged a request for them to be sent down to her, and hoped they would come overnight.  It was not yet nine and there was no sign of Rani, so she went to make herself a coffee then sat down at her desk to start her day.

Within minutes her computer pinged with a new email and she opened the message. It was to All Staff from the Head of Special Collections, asking for a volunteer. Three of the Library’s extremely valuable fine volumes were to be transferred up to Boston Spa that morning. They were going by train and had to be accompanied, but the librarian scheduled to take them had just called in sick.  Laura didn’t hesitate and picked up the phone to offer her services which were gratefully received. Summoned to Special Collections, she was issued with a train ticket and handed the books, wrapped in acid free paper and foam packaging inside their special carrying case. Laura felt like the bag should be handcuffed to her wrist, such was the lecture she got from the Curator about how significant they  were and how much trouble she’d be in if anything happened to them.

On her way out she took a short cut through one of the reading rooms which were all opening up to the public for the day. As she passed the reference shelves she spotted a set of almanacs and before she could think twice she’d grabbed the volume for 1953 and stuffed it into her own shoulder bag. It set the alarm off as she left the building but once she’d shown the security guard her precious cargo she was on her way, the almanac unseen in her bag.

Sadly not even priceless Victorian first editions got to travel in the first class carriage, but Laura had a window seat and a table and she planned to make the most of her unexpected excursion.  She took out the almanac, opened it carefully and started to read. The book covered everything that had happened that year – the Coronation of course, the ascent of Everest, Crick and Watson’s breakthrough in DNA and the death of Stalin. And then there it was, a chapter on the great North Sea Flood of 1953. A storm surge had raced down the east coast of the country in the early hours of 1st February causing huge amounts of damage and loss of life. It had eventually reached London, with the waters rising to the very top of the Embankment which would surely have affected the underground river systems. The piece referred back to the Thames Flood of 1928 when the embankments were actually breached and people living in basement slums drowned. The missing pamphlet about the closure of the underground tunnels was from 1929, and the files were closed in 1953 – she might finally be getting somewhere.