Laura gets a phone call… 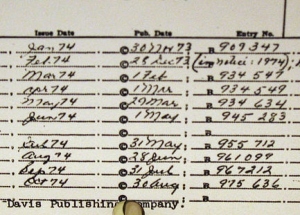 Back at the British Library, Laura was wishing with all her heart that she had taken a few more days off. By lunchtime she had a headache and an urgent need for some fresh air. She had spent the morning trying to reconcile old card catalogue entries with the new computer system, a task which required the eyes of a hawk and the patience of a saint – Laura found she had neither. The faded copperplate handwriting on the index cards was beautiful though, and she wondered about the people who had written them.

Lost in thoughts of Victorian librarians, when the phone on her desk rang, it made Laura jump. The phone didn’t usually ring from one day to the next – librarians never actually spoke to each other if they could possibly avoid it, and what they’d done before email she couldn’t imagine.

She picked the receiver up rather gingerly. “Hello?”

“Hello?” It was a man’s voice at the other end of the line.

Laura tried to sound a bit less suspicious and a bit more professional, “This is Cataloguing, may I help you?”

“This is Laura,” suddenly she knew who was on the end of the line and her mouth went dry.

“Hello,” she repeated. Unable to think of anything intelligent to say, Laura said nothing else and waited to see what he wanted.

“I was just wondering if you were free on Saturday?”

“Saturday? That’s tomorrow.” Of course she was free but he didn’t need to know that.

“Yes, I know it’s short notice but I, we, have been invited to a sort of party.” Sitting in his portakabin office back at his yard, Joseph was aware that he wasn’t selling this very well, and his discomfort was not helped by Cosmo who was pulling faces through at him the window.

“We?” Laura raised her eyebrows and stared at the receiver, since when was there a we?

“Yes, the Margrave particularly asked for you. I’ll collect you at eight.”

“Okay. Bye then,” and the line went dead.

Six words. She’d said six words, one of which was “okay”  – not exactly playing hard to get as Rani would put it. Oh well.

Over lunch Rani quizzed her friend about her plans for the weekend. She was going to a new nightclub in Soho on Saturday night, very arty and bohemian apparently, and out of habit rather than expectation she asked if Laura would like to come.

“I can’t, I’m already going out,” Laura regretted the words as soon as she said them.

“Going out! Laura you dark horse, is it the dolphin guy? Did he call? I thought my eyes were playing tricks on me when I saw you on the phone.”

Laura said nothing which Rani took as a yes, and it was easiest just to leave it at that. She let her friend chatter on happily about her Great Dates Past, and what she thought Laura should wear, say, do, etcetera. As her party wardrobe consisted of one winter dress and one summer dress, and she had no intention of saying or doing anything out of the ordinary, she wasn’t really listening. However as the party would probably be anything but ordinary, there was plenty to occupy her mind.

When she got back to her desk she found an email from Tom at Boston Spa had landed in her inbox. He was just letting her know that the section of archives they’d been looking in had now been locked and deemed “restricted access”. The notice said In the interests of National Security of course, but should he try and find out why this had suddenly happened now? Laura replied with a definite no, she didn’t want to draw any more attention to what they’d been doing.