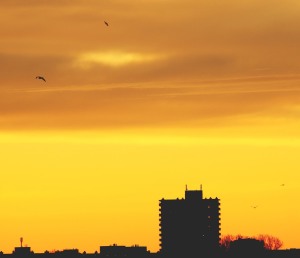 Darkness had fallen by the time Laura slept. It was almost midnight, and Joseph was beside her, awake and watching, thinking.

She lay on her stomach, her hair spread across the pillows like a cloud. One or two tendrils clung to skin still slick with sweat from their lovemaking. Joseph picked up a curl and wound it round his finger, wondering at what had passed between them. The heat, the intensity, the total surrender had taken him by surprise, and yet somehow now he understood, of course it had been that way.

He rolled onto his back and stared up at the ceiling. He was worried about her and even more so about the reason she was there – the threat to the Riverways and the danger facing them all. Eventually he slept, but restlessly, his mind unable to be still. He dreamed of being underwater again, but this time he glimpsed the face of the woman. Then he woke with a start and sat bolt upright. The dream had disturbed him, but it had planted the seed of an idea.

It was quarter to five in the morning, and just one person he knew would be up and about, and hopefully willing to help him. He covered Laura with a sheet and got out of bed.

Jeannie was scrubbing the counter at the café in preparation for opening up to their early bird customers who’d arrive on the dot of five-thirty a.m. She wondered who could be calling at this hour but answered her phone as soon as she saw it was Joseph. After she’d hung up, she went into the kitchen to speak to Bill.

“He said I should only be a few hours, then someone else will take over.”

Bill said yes, as she knew he would. Sometimes she wondered what she’d done to deserve such a wonderful husband, and she gave him a big kiss before heading upstairs to their flat. Just for once she was pleased they lived over the shop.

By the time Bill was opening up the café, Jeannie had found the address Joseph had given her. There was a security guard at the gate, but he seemed to be expecting her and waved the car in. She stared up at the empty building, there was a light in a top floor window, but otherwise no sign of life. Parking where the guard indicated and grabbing the carrier bags she’d brought, she got out, and Colin walked towards her.

Colin warned her about the lift and its dodgy doors, and it carried her upwards in near total darkness, the only light coming from the control buttons. The lift stopped at the tenth floor and she stepped out cautiously onto the landing, increasingly curious about what she would find.

Joseph was listening for the lift and stood at the open door of the flat, sending a shaft of light out onto the landing. His shirt was untucked and his feet were bare. Jeannie looked him up and down and sighed heavily.

He had the grace to look embarrassed as he took the carrier bags and followed her into the flat.

“Nice place,” Jeannie commented and went to look around. Before Joseph could stop her she’d opened the bedroom door and there lay Laura, motionless under a rumpled sheet.

“I take it the fact that you asked me to bring clothes means she’s sleeping rather than dead?” Jeannie said a few minutes later as they stood at the breakfast bar in the kitchen.

“Did you think I’d killed her?” asked Joseph, unable to look his oldest friend in the eye and feeling wretched.

“No of course not, but something’s not right. You look like you’ve got the weight of the world on your shoulders.”

Jeannie looked at him questioningly but he just leaned against the counter and sighed.

“Never mind. I’ve done a selfish thing, that’s bad enough, but now I have to do another.”

“And are you planning to tell her?”

Joseph shook his head, and stared glumly at the packet of teabags he’d pulled from one of Jeannie’s bags.

“Yes,” he agreed miserably. “But I must leave now, and I can’t say where I’m going and I don’t know when I’ll be back.”

Jeannie didn’t say anything else, he was torturing himself quite enough.

Once Joseph had found the rest of his clothes he was ready to go. He reminded Jeannie that either Colin or Harry would be outside, that her relief would be there in a couple of hours, and that Laura absolutely must not leave the flat. She watched him into the lift from the doorway telling him not to worry, and then went back into the kitchen.

She prodded a few buttons on the coffee machine and sent a shower of ice across the floor before giving up on the fancy appliances, and filling the smallest of the copper saucepans with water. He’d said to bring tea, so she had, and she might as well have one while she waited and tried to work out what on earth she would say to Laura when she woke. She had seen the haunted look in Joseph’s eyes when he’d said he was leaving, and guessed that Laura would feel that way too. She’d never thought she’d see the day when Joseph fell for someone, but now it seemed he’d fallen hard.

Can’t wait for next week? Buy the book